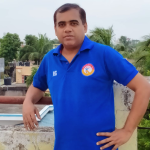 26 Jul  2021: India’s Challenge in Tennis in this edition of Olympic Games ended after Sumit Nagal lost to World No. 2 Daniil Medvedev at Ariake Tennis Court 1, here on Monday.

The match, that lasted for 1 hour and 6 minutes was thoroughly dominated by the Russian and Nagal could not even come close as he lost in straight sets 6-1, 6-2.

Earlier Nagal became the first Indian to win a single’s match at the Olympics since Leander Paes as he won the first round match against D. Istomin on Saturday.

On Sunday, the women’s doubles pair of Sania Mirza and Ankita Raina bowed out after losing their first-round match.